I’m starting a new blog. The domain name, alex-is.com, wasn’t my first choice. It wasn’t even my second or third. I wanted the domain name to be short and related to me or a hobby of mine. The name was inspired by the status updates you make on Facebook or Twitter. For example, when updating my Facebook status via the iPhone it starts with “Alex”, then you often use a verb such as “is”. Hence alex-is.com. 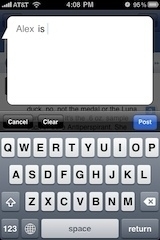 What to write on an iPhone?

Why start a new blog?

I have nothing against my previous blog I had at janella.com. But that domain name was a gift for my wife. Long story short - she disliked her @yahoo.com email address. I thought a personal custom email address would be a great gift. It has been and continues to be, used more for email than for web content. But I co-opted the website portion for my own purposes.

I blogged there regularly. But I have run into a little writer’s block as of late. I am uncertain of the cause, but I believe part of the problem stems from a revelation I had the other week that I’ve been unknowingly blogging for two. While the posts there were ascribed to me, I always felt I was speaking for both of us. This was not necessarily a bad thing, but my wife has never agreed to blog. As far as I know, she has no such desire to do so.

I’ve come to this realization not through anything she has said or done, but by simply reflecting on how much I enjoy writing about what I do or have done. As with many unfocused personal blogs, I’ve chosen to write on a variety of subjects, like the movie or television show I just watched, the trip we just took, or how much I hate the neighbor’s barking dog. I chose to be transparent about my daily activities. I don’t believe I ever asked her if she wished to do the same.

When I first realized this, I tried to change the style of how I blogged on janella.com. But I kept hitting a wall. It’s because that site will always be associated with both of us. I came back to the thought of creating a new separate website, under a different banner, in the hopes it would free up this writer’s block. And so, I think starting my own domain name would shrug off the impediment I feel. After all, as I’ve said before, janella.com was a gift for my wife.

Janella.com has been through many iterations over the years, pointing to various types of pages and services. Currently, it’s pointed to all the photos we have taken in recent years. I think it will remain as such.

What Will I Blog About?

Same subjects as before: news, movies, television, technology, photography, and whatever subjects I care to comment on. I’ll try to stay away from subjects involving family and friends, deciding to keep this part of my life private. But it will be difficult to stay away from that subject since it is a large and important part of my life. I’ll definitely stay away from anything concerning work - that’s one hot potato I’ll always avoid - with the exception of job searching, a subject I’ve written about previously.

I would like to steer clear from reblogging as much as possible. I’d prefer to use my tumblr for this function. But you never know. Reblogged media may creep in. If I reblog, I want to provide some of my own commentaries, as opposed to simply republishing material without thought.

Ideally, I would like to make a blog post at least once a week. This desire is a goal. Let’s see how real it turns out to be.